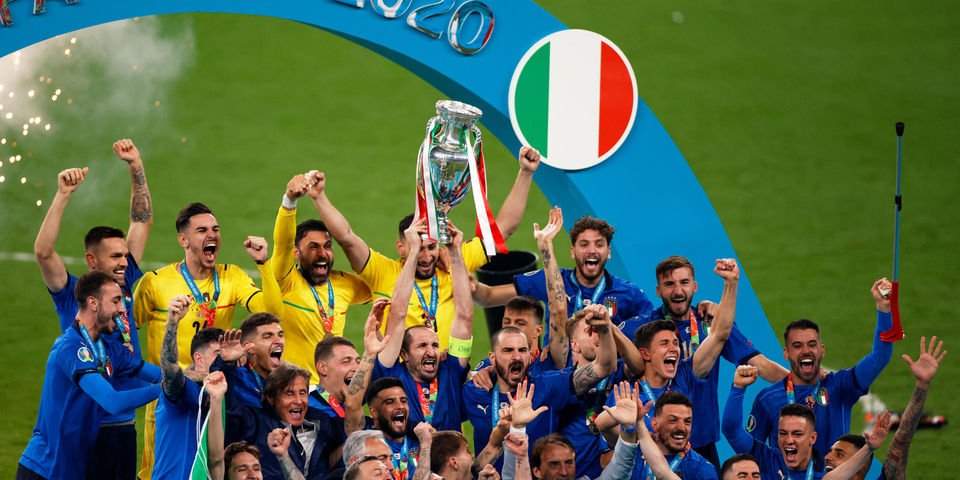 Italy’s defender Giorgio Chiellini (centre) raises the European Championship trophy during the presentation after they won their UEFA EURO 2020 final match against England at the Wembley Stadium in London on July 11, 2021.

Italy inflicted more penalty heartache on England to win Sunday’s Euro 2020 final 3-2 in a shoot-out, Bukayo Saka missing the decisive kick to deny the hosts after the game at Wembley had ended in a draining 1-1 draw through extra time.

Saka’s kick was repelled by Gianluigi Donnarumma to give Italy the Henri Delaunay trophy for the second time at the end of a shoot-out in which England scored their first two penalties but then saw Marcus Rashford and Jadon Sancho also fail.

Euro 2020
Supporters of the Italian national football team celebrate after Italy beat England 3-2 on penalty shootout to win the UEFA EURO 2020 final match, at the Fori Imperiali fanzone, in Rome on July 11, 2021.

Vincenzo Pinto – AFP
Jorginho could have won it for Italy only for his penalty to be saved by Jordan Pickford, giving renewed hope to the England support who had earlier created a febrile atmosphere with their team looking set to run away with this final.

Italy’s defender Giorgio Chiellini (centre) raises the European Championship trophy during the presentation after they won their UEFA EURO 2020 final match against England at the Wembley Stadium in London on July 11, 2021.

The nerve-shredding climax seemed unlikely given the way the match began, with Luke Shaw scoring for Gareth Southgate’s England after just one minute and 57 seconds, the fastest goal ever in a European Championship final stunning a team who arrived here on a record 33-match unbeaten run.

Italy were shell-shocked and struggled to recover in a stadium where the official attendance was 67,173 but more England fans clearly managed to enter after disgraceful scenes when supporters without tickets stormed the gates.

Serious questions will be asked about security — the game was also briefly held up by a pitch invader late on — but English fans were obviously desperate to see their team finally win a major tournament for the first time since the 1966 World Cup.

Italy’s players celebrate with the European Championship trophy after they won their UEFA EURO 2020 final match against England at the Wembley Stadium in London on July 11, 2021.

Paul Ellis – AFP
Italy, though, had most of the possession after falling behind and ultimately deserved their equaliser when it came midway through the second half through Leonardo Bonucci.

With no further scoring, this was the first European Championship final to be decided on penalties since 1976.

It is more penalty agony for England, whose list of previous shoot-out exits included losing to Italy at Euro 2012 as well as in the Euro 96 semi-finals against Germany when Southgate missed the crucial kick.

While their 55-year wait to win another major international title goes on, Italy’s own particular half-century of hurt is over.

Leonardo Bonucci
Italy’s defender Leonardo Bonucci poses with the European Championship trophy, and the player of the match award, after they won the UEFA EURO 2020 final match against England at the Wembley Stadium in London on July 11, 2021.

Facundo Arrizabalaga – AFP
The Azzurri have won four World Cups but their sole European Championship triumph before this dated back to 1968.

They had lost two European Championship finals in little over two decades, with the agony of losing to France via a golden goal in Rotterdam in 2000 and then being torn apart by Spain in 2012, going down 4-0 in Kiev.

Roberto Mancini’s team had an extra day’s rest in between the semi-finals and this final but they appeared completely unprepared for the experience that awaited them in London.

England’s baying supporters created a hostile atmosphere, and that combined with Southgate’s tactical choices seemed to catch the Italians off guard.

England brought back Kieran Trippier in place of Saka in the only change from their semi-final, reverting to a five-man defence.

Within two minutes the choice of system paid dividends as England broke forward, Harry Kane opening the play up to Trippier, who crossed from the right to the far post where the arriving Shaw scored on the half-volley.

Italy, who had not been behind all tournament, were stunned and the only surprise was that England did not try to press home their obvious superiority.

Instead they allowed Mancini’s side to have the ball, confident they could withstand whatever was thrown at them.

England were rarely seriously troubled in the first half even if Federico Chiesa remained a danger.

It was a rather different story in the second half once Mancini had turned to his bench, notably replacing hapless striker Ciro Immobile and sending on Domenico Berardi.

As the game opened up, Chiesa probed again and forced a save from Pickford, before a John Stones header from Trippier’s corner was tipped over by Donnarumma.

The equaliser arrived in the 67th minute. Marco Verratti stooped to meet a corner with a header that Pickford tipped onto the post, but Bonucci was on hand to score the rebound and celebrated with the Italy fans massed at that end of Wembley.

Italy then lost the outstanding Chiesa to injury. Lorenzo Insigne did not last into extra time either, and Verratti came off too.

England, meanwhile, sent on Jack Grealish in the hope of a bit of magic, but it would come down to penalties, and more gut-wrenching disappointment for them.