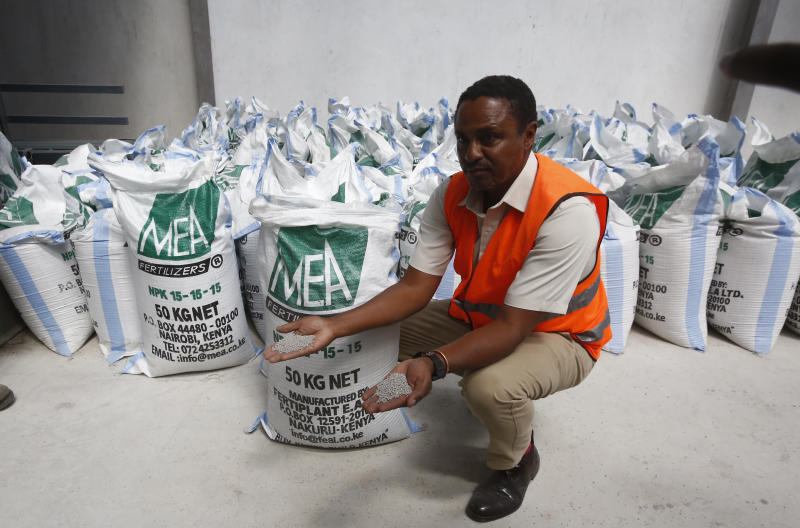 Farmers can now breathe a sigh of relief as Fertiplant East Africa (FEA) Limited, a subsidiary of MEA Limited established a Sh3 billion factory in Nakuru.

Speaking during a tour of the plant, FEA Executive Director Titus Gitau said Kenya’s agricultural productivity has been on a downward trend due to reliance on imported fertiliser.

“The imported fertiliser is formulated from Europe and North America. Kenyan soils are unique in their composition hence the need for a fertiliser specific for our farms,” said Gitau.

The plant, whose construction began in 2015, was on its third-day trial run on Thursday with over 200 employees on site.

Gitau explained that a majority of Kenyan farmers have been randomly picking fertilisers without a consideration of what their soils need, worsening their fertility and lowering productivity.

“We have consistently used fertilisers that have acidified our soils. We are coming in to alter the components to suit the needs of our soils, which will turn around the yields of our farms,” he said.

The new factory will be producing artificial manure that will be crop and soil specific for different areas with a keen focus on tea, coffee, sugarcane, potatoes, and maize.

While the traditional fertilisers have been DAP, CAN and UREA, Fertiplant is targeting to increase the uptake of NPK fertiliser to reverse the rising soil acidity.

“Research done in the 1960s indicated that our soils had sufficient potassium which dropped significantly in 1980s. However, farmers especially in the maize growing belt continued to use DAP, which only adds phosphorous to the soil,” he added.

The factory will be operating in three shifts a day with a capacity to produce at least 100,000 metric tonnes a year, which translates to two million 50kg bags.

Kenya joins the league of a few African countries producing their own fertiliser, which will be a game-changer in offering price competitive products.

“We shall also be offering soil testing services to farmers at subsidised costs. Prices of imported fertiliser have been prohibitive due to transport costs, which are passed on to farmers,” he said.

The project is in line with the government’s Big Four Agenda to boost food security and industrialisation. – standardmedia.com