All non-essential shops set to reopen from April 12 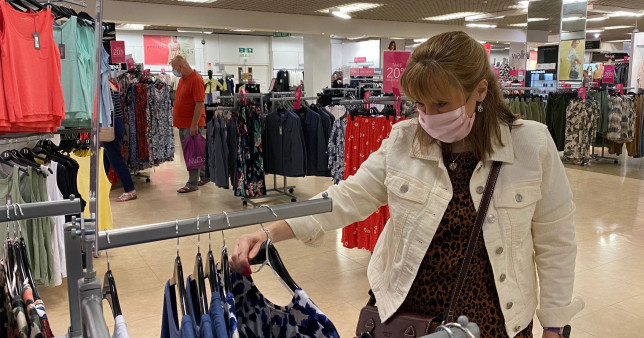 All non-essential shops are allowed to reopen from April 12, Boris Johnson has confirmed. This is a breaking story. More to follow. Get in touch with our news team by emailing us at webnews@metro.co.uk. For more stories like this, check our news page.

Gyms and hairdressers given green light to reopen on April 12

People will be able to get back into gyms and hairdressers from next week, as the prime minister has announced they are set to reopen. Boris Johnson said this afternoon that they would no longer have to remain closed from April 12. He gave an update on the ‘roadmap’ out of lockdown for England, when he also announced that non-essential shops, libraries, zoos, and holiday campsites would be able to reopen from the same date. Pubs and restaurants will also be allowed to serve customers outdoors from next Monday. ‘We set out our roadmap and we’re sticking with it,’ Mr Johnson said. ‘On Monday the 12th I will be going to the pub myself and cautiously but irreversibly raising a pint of beer to my lips.’ In addition, ministers have promised to supply everyone in England with two quick-result lateral flow tests for Covid-19 each week in a bid to cut the chain of transmission as lockdown eases.

The lateral flow tests – which can provide results in around 30 minutes – will be available from Friday, regardless of whether people have symptoms. People will be able to obtain a test through a home ordering service, workplace or school testing programme, or by collecting one at a local test site. The Prime Minister said earlier: ‘As we continue to make good progress on our vaccine programme and with our road map cautiously easing restrictions under way, regular rapid testing is even more important to make sure those efforts are not wasted,” he said. ‘That’s why we’re now rolling out free rapid tests to everyone across England – helping us to stop outbreaks in their tracks, so we can get back to seeing the people we love and doing the things we enjoy.’ Mr Johnson chaired a virtual meeting of the Covid O committee before briefing the full Cabinet on the arrangements for the latest phase of lockdown lifting.

At the press conference this evening, he was also expected to outline the Government’s approach for lifting restrictions on holidays abroad starting from May 17. While there is relief among MPs at the prospect of the economy reopening, there is concern among some about the proposals for the ‘Covid status certification’ scheme dubbed ‘vaccine passports’.

It’s still too early to say whether people will be able to go on foreign holidays again this summer, Boris Johnson has said. Giving an update on the nation on Covid plan, the Prime Minister said plans that may allow some travel again are ‘not there yet.’ The state of the pandemic abroad, and the progress of vaccination programmes in other countries means England may not allow international travel on May 17 as previously planned. The update also confirmed that there would be a traffic light system to decide which countries will be able to resume quarantine-free travel to England.

This would give all countries a green, amber or red rating, with those deemed to be low risk becoming the destinations where the fewest restrictions are in place. More detail on how this could work in practice is set to be announced later this month but no decisions have yet been made, Mr Johnson stressed. It is understood that assessments of the risk in will be based on a range of factors, including the proportion of a country’s population which has been vaccinated, rates of infection, emerging new variants and the country’s access to reliable scientific data and genomic sequencing.

Travellers arriving from countries rated ‘green’ will not be required to isolate although pre-departure and post-arrival tests will still be needed. For those arriving back in the UK from destinations classed as ‘amber’, a ten day self-isolation period still applies although this can be shortened if the person tests negative after five days. Red restrictions remain the harshest and arrivals are required to quarantine at a designated hotel, as is the case currently.